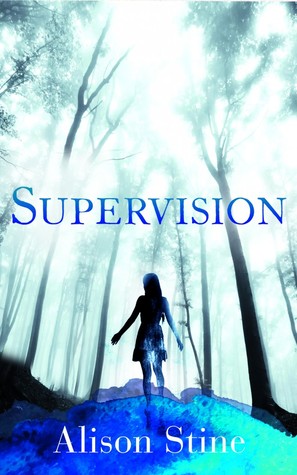 Once I had the central place for my novel (collapsing house, weird additions, rotting barn), I started thinking more about the people. Who would live in such a forgotten house? Who might be sent there as punishment? What were the stories of all its many rooms?

Did something bad happen there?

I did think of my grandmothers’ houses when I wrote SUPERVISION, although the book is not specifically set there. Both my parents grew up on small farms in Indiana, and I have many wonderful memories of the farmhouses.

I thought of my maternal grandmother when it came to scenes in SUPERVISION set around the kitchen table. That’s where everyone in my mother’s family—and it’s a large family of six kids—would gather to tell stories, get together for meals, and then stay and stay and talk and talk… That definitely influenced several scenes in SUPERVISION where the main characters regroup. After traumatic events, fights and encounters with the supernatural, they go to—where else?—the grandmother’s kitchen table.

I thought of my paternal grandmother when it came to the outdoor scenes in SUPERVISION. That is the landscape of my dad’s childhood: wild fields and overgrown forests. My grandparents had a whole herd of cats that would come around after dinner— barn cats, strays, feral creatures. My grandfather would fed them table scraps from a tin pie pan. I remember him rattling the pan to get them to come.

My paternal grandparents also used to take me to a rural gas station where the owners would give me sweet tart suckers and let me play with their manx cats, a bred that is tailless. Manxes play a large part in SUPERVISION (I thought they were magic and cool even then).

Family and ancestors are very important to SUPERVISION. The novel is about, in part, an inherited secret. Like most secrets, it’s better if it’s told. It’s better if it’s shared, and if you have family around to help you. I’m lucky in that, while not always understanding what I’m doing or why I’m on this weird artistic path, my family has always supported my work.

My main character Esme Wong gets that support too. Though it takes her and her family and her rather strange friends some time to come together, they eventually do: around the kitchen table at her grandmother’s house.

Thanks so much for joining us today, Alison!

ALISON STINE’s first novel SUPERVISION will be released by Harper Voyager UK in 2015.

Also the author of three books of poetry: WAIT (University of Wisconsin Press, 2011), OHIO VIOLENCE (University of North Texas Press, 2009), and LOT OF MY SISTER (Kent State University Press, 2001), she has worked as an actor, an artist’s model, a high school teacher, and a professor. She holds a Ph.D. in English from Ohio University, and is an avid urban explorer.

Book Blitz: Lost Eye of the Serpent by @jphilips2323 and GIVEAWAY

When I heard about this book, I knew I had to sign up. I mean,…