Three days in, how is NaNoWriMo going for you all? Have you been keeping up? If not, don’t worry! There are still plenty of days ahead 🙂 I’ve honestly been surprised by what I’ve gotten done so far. I’ve already edited one of RBRP’s Luka chapters and two extra scenes for him written!

If you’re needing some extra help, I found a great resource here on Susan Dennard’s site to help plan and motivate, whether you are reaching for the normal 50K or are a rebel like me.

Now onto The Young Elites, a YA fantasy by Marie Lu (yes, she also wrote Legend!).

(which you can buy on Amazon, Barnes and Nobles, and on Indie Bound. to name a few) 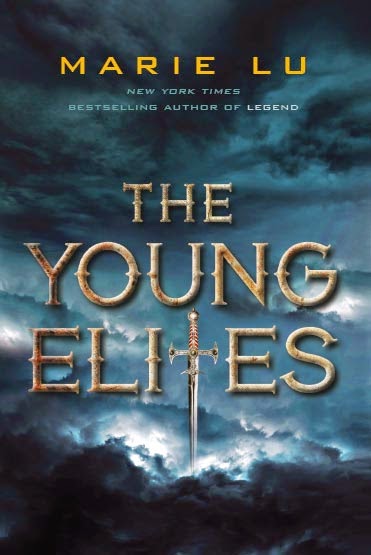 Adelina Amouteru is a survivor of the blood fever. A decade ago, the deadly illness swept through her nation. Most of the infected perished, while many of the children who survived were left with strange markings. Adelina’s black hair turned silver, her lashes went pale, and now she has only a jagged scar where her left eye once was. Her cruel father believes she is a malfetto, an abomination, ruining their family’s good name and standing in the way of their fortune. But some of the fever’s survivors are rumored to possess more than just scars—they are believed to have mysterious and powerful gifts, and though their identities remain secret, they have come to be called the Young Elites.

Teren Santoro works for the king. As Leader of the Inquisition Axis, it is his job to seek out the Young Elites, to destroy them before they destroy the nation. He believes the Young Elites to be dangerous and vengeful, but it’s Teren who may possess the darkest secret of all.

Enzo Valenciano is a member of the Dagger Society. This secret sect of Young Elites seeks out others like them before the Inquisition Axis can. But when the Daggers find Adelina, they discover someone with powers like they’ve never seen.

Adelina wants to believe Enzo is on her side, and that Teren is the true enemy. But the lives of these three will collide in unexpected ways, as each fights a very different and personal battle. But of one thing they are all certain: Adelina has abilities that shouldn’t belong in this world. A vengeful blackness in her heart. And a desire to destroy all who dare to cross her.

I cannot rave about this book enough. I liked Legend. I did. But TYE outshines it by far. In the acknowledgments, Marie Lu mentions that she originally intended this to be a hero’s journey with a different character, but the story didn’t work. Then she discovered Adelina and the story morphed into a villain’s journey. And truly, I’ve never read a book about such a dark character that makes you like and empathize with her so much.

It really goes to show there are two sides to every story. Nobody is only evil or only good. People are complicated. And TYE shows us just that. The book reminds me a little of the movie Maleficent. We know the story of Sleeping Beauty, but suddenly we see the villain’s side and we root for her louder than we do Aurora.

TYE brings a whole lot of fascinating characters. You’ve got the beautiful Rafaele, the innocent Violetta, the burning Enzo, and the self-flagellating Teren (who, I’m realizing right now, is my favorite character). None of the secondary characters are simple and are a complicated mix, ready to surprise us until the very end.

I loved seeing Adelina wrestle with her past and her darkness. TYE also brings up the question—how much is a person’s actions a result of abuse and how much is due to their nature? I don’t think there is any easy answer, and Marie doesn’t treat it as such.

And the plot? Don’t even get me started on the plot. Let me say I was surprised at the very beginning with Adelina’s power—such a unique gift! I’ve never heard of any superhero power like this—to the last pages.

Let me wrap up by saying I’m a wee jealous she pulled this off. (I think Adelina is what I was aiming for with July in my book, 12, albeit, not quite so dark.) And I am so glad I bought this one in hardcover for my shelves.

You might like this book if you’re a fan of superheroes, magical powers, the show Heroes, a Renaissance feel, and characters don’t necessarily see everything as unicorns and rainbows. You might not like this book is you prefer black and white characters and don’t like fantasy.