Want a FREE copy? Not only can you enter the Goodreads GIVEAWAY here, enter the RAFFLECOPTER GIVEAWAY here. Or–leave a comment below to win a ereader copy (courtesy of Xpresso Book Tours). I will use a random number generator next Sunday at 11:59 EST to select this winner.

You can also buy the book on Amazon and at Barns and Nobles. 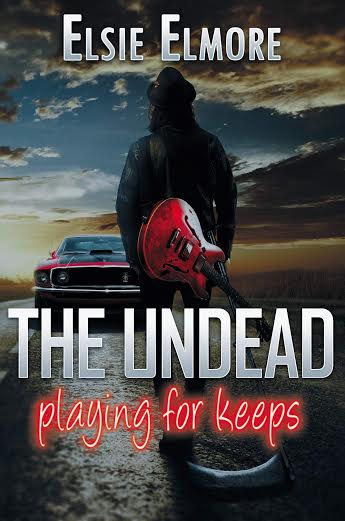 I’m excited to be here on Abby J. Reed’s blog to talk about my new release,

The Undead: Playing for Keeps. I’ve known Abby for two years, but it seems much longer. We started as classmates in an online class, then became CPs. She’s an awesome writer and artist, which makes her blog the perfect places to share the journey to make my cover.

Curiosity Quills, my publisher, has created an awesome information sheet for their authors. The goal is to think about the cover in a visceral way: what colors should be present? What emotions should the image evoke? What feeling should resonate with the reader? Bottom line.. What gut reaction do you want? The immediate answer has “buy me” somewhere buried in there, but that is not the focus. Your cover needs to reflect some element of the story.

I turned to my CP’s and beta readers to poll their thoughts as well. This worksheet was first completed in December, less than a month after I signed the contract with CQ, and then again in March. Looking back, my December ideas were a little vague. But after working with an editor for a few months, my cover ideas became more clear and better represented the story the second time around.

Colors and feelings were two components I needed to address during this process. For colors, I thought of reds and blacks (this probably had a lot to do with the fact that red is my favorite color.) And feelings… I wanted the reader to feel a sense of mystery and maybe a touch of foreboding when they looked at the cover.

The Undead is told through two different POVs (thanks to the editing process). Part of the story comes from Eric, a grim reaper. Since there were so many YA books with pictures of girls on the front, I decided I’d rather focus on Eric than Lyla. I sketched out a few ideas that might represent the story line. Eric’s music was always a key element I wanted to highlight. 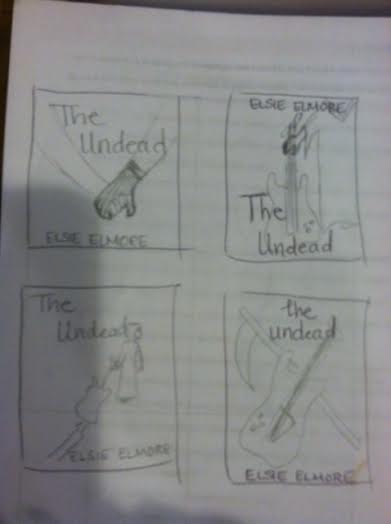 I was introduced to Alexandria Thompson from GothicFate.com in the beginning of April. She was the graphic artist I was assigned by CQ. (Go now, check out her work here and see why I was thrilled with the match-up.)

But a few days before we made contact, a new idea came to me… a male hand holding a set of keys. I can’t deny that the idea felt brilliant. Especially if the tokens on the key chain represented different facets of the story. So when Alexandria and I started exchanging emails, I shared my thoughts. 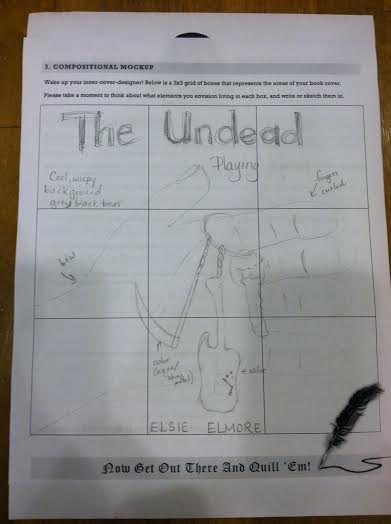 She loved the concept. To get an idea, I took a picture of my son’s hand and sent it to her. 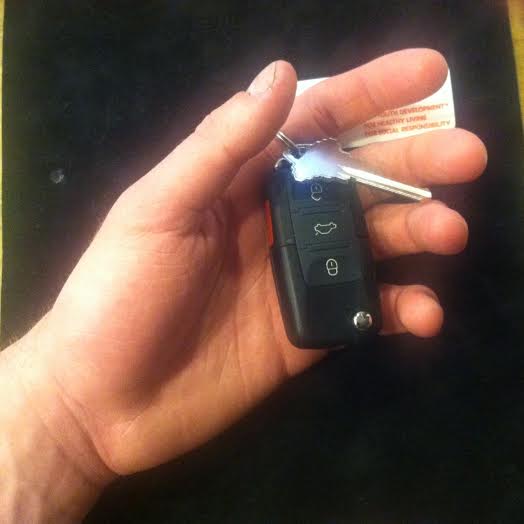 From that email, she started adding elements, backgrounds, and adjusting color schemes for the idea. I really wanted the hand to be black and white because I thought it would set the tone. The Undead deals with corpses and the grim reaper.

An eerie tone was the vibe I wanted to go for… at first. 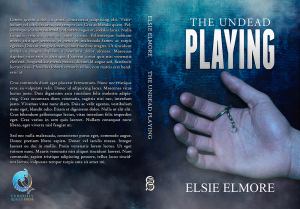 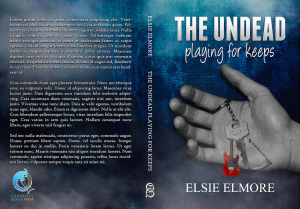 But my thoughts did not translate into an image that told the story the way I needed. The hand was to represent Eric’s hand, but instead, the hand ending up looking like a corpse’s.

Alex created a fabulous key chain to represent elements in the story. So we looked at a cover with just the key chain. 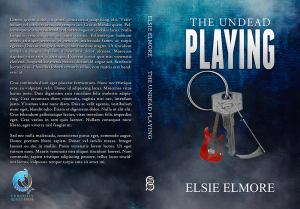 But that didn’t tell enough about the story either.

Alex then suggested I think more about scenes and characters. Again, I didn’t want to focus on Lyla so my search targeted males. When we started searching for Eric… we came across a few guys with guitars, but none of them fit Eric until we found an image of a guy walking down the road with a guitar hung on his shoulder. He oozed a rebellious nature and had a dash of mystery since his face wasn’t revealed. He was perfect and perfectly Eric. Alex added a Mustang, which is Eric’s car, and a scythe to represent his job and his dilemma.

I thought some of the lettering in the title should be red, again thanks to my mad appreciation for that color, but Alex suggested a backlight. She created a version with red lettering and proved she was right. 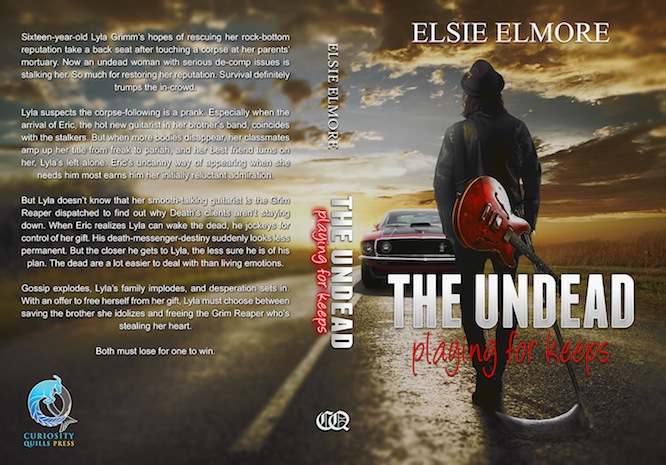 Red letters got a bit lost in the image, but the red backlight picked up on the bar vibe. And I loved it!! (This was completed by the first half of May.) The marketing team all had a look at the final product and were thumbs up for The Undead’s cover. 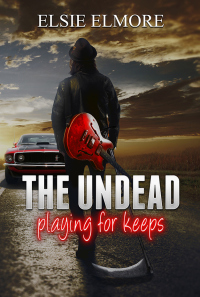 A little more tweaking occurred with fonts and coloring and the final version is pictured below. (Last tinkerings were completed before the book went to production.) 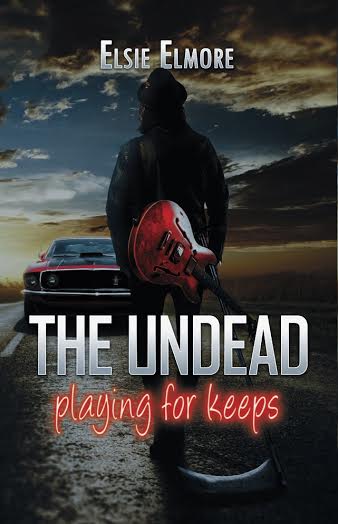 This journey has certainly helped me appreciate the time and energy involved. Creating a cover is complex process, but a strong support system makes the job much smoother. Special thanks to all those who had a hand in bringing Eric and The Undead to life.

Thanks so much for the behind-the-scenes look, Elsie!

Want to know more about The Undead? Here’s the synopsis:

When an undead woman with serious de-comp issues stalks sixteen-year-old Lyla Grimm, her hope of rescuing her rock-bottom reputation takes a back seat. Especially once Lyla’s new talent of resurrecting the dead draws the attention of Eric, a Grim Reaper with a guitar and a chip on his shoulder.

While Lyla navigates the gossip-ridden halls, Eric works to gain her trust and discover why Death’s clients aren’t staying down. If she passes on her gift, his death-messenger destiny might be altered. But the closer he gets to Lyla, the less sure he is of his plan. The dead are way easier to deal with than the living. 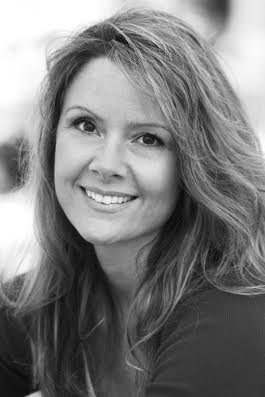 Elsie Elmore lives in North Carolina with her husband and two kids.

With a science education degree from NCSU, she never imagined she would someday write stories that challenge the laws of nature. She loves the color red, has an appreciation for chocolate and coffee that borders on obsession, and wishes fall temperatures would linger year round.

Elsie is a member of several writing organizations: RWA, SCBWI, and WSW. The Undead: Playing for Keeps is her debut novel.

3 Ways Sex is Portrayed in YA Books

I recently attended a workshop on Sex in YA by the Rocky Mountain Fiction Writers.…