just kidding. But the gas mask alone freaks me out enough to want to inhale this entire series. Or lock the doors to keep out any empty children.

Time of Ruin is the second book in The Ash and Ruin Trilogy and it releases TOMORROW! You can enter into a giveaway of the book here. The first is called World of Ash. 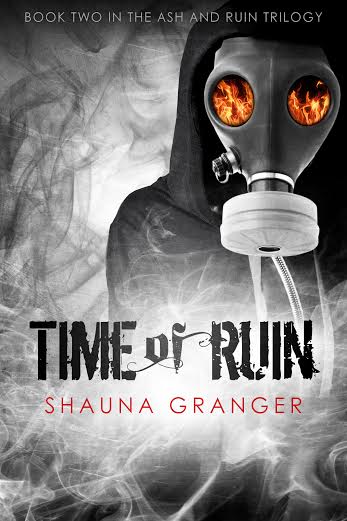 The world has ended, and hope is the most dangerous thing left.

Battered and bruised after barely escaping San Francisco with their lives, Kat, Dylan, and Blue press north – desperate to reach the possibility of a new home.

The further north they go, the harder it becomes to ignore the signs that they’ve made a fatal
mistake. Kat must face the impossible truth that there is no escape, there is no safe haven, and their worst nightmares don’t come close to their new reality.

Sitting on the bumper again, my jagged nails scratch at the plastic as I fight the urge to tell Dylan to hurry. Blue looks up at me and whines. I shake my head at him and pet him with the toe of my boot. His eyes are dark blue in the evening light. Blue drops his head and looks at Dylan, his ears perked up into two triangles. I follow his gaze. Dylan’s still standing, holding his instruments of destruction, and staring at the raging fire.

Blue pushes to his feet and barks one sharp, loud yelp. My hand drifts over to the rifle by my leg as I let my eyes slide from Dylan’s back to search for the source of Blue’s panic.

“Dylan.” I mean to call to him, but my voice comes out in a strangled whisper. I swallow as I stand and pull the rifle with me. Across the street, the shadows between the houses are taking shape. They’re no longer the snapping, twisting formless shadows from the fire, but something more, something substantial. Dylan lifts the can of fluid and squirts more onto thefire, making it spike and lick the air.

“Dylan,” I try again, my voice a little louder. The rifle is in my hands now. The stock is pressed into my shoulder as I aim at the shadows peeling away from the deeper black.

Still Dylan doesn’t hear me, or is ignoring me.

Blue barks repeatedly, backing up until he hits the car. I find my voice and scream his name loud enough that it hurts my throat. Finally he looks at me, his face cast in shadows with the light behind him. I can’t make out his features, but I can make out the horde of Pestas behind him.

“Run!” I aim the gun as I walk backward around the car.

Instead of listening to me, he looks back to see what has terrified me so. They shuffle forward, lines of them spilling out into the cul-de-sac. Dylan takes two steps backward, nearly tripping over his feet and making me scream again. I rip the rear door open for Blue to get in the car.
Slamming the door behind Blue, I lift the rifle and fire a shot, aiming well away from Dylan. The
Pestas cringe in unison, as though they are all puppets controlled by the same set of strings. 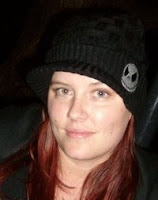 Like so many other writers, Shauna grew up as an avid reader, but it was in high school that she realized she wanted to be a writer. Five years ago, Shauna started work on her Elemental Series. She released the first installment, Earth, on May 1, 2011 and has since released four sequels, with the series coming to an end with Spirit. She is currently hard at work on a new Urban Fantasy series, staring a spunky witch with a smush-faced cat named Artemis.

Prodigy, is the second in the Legend trilogy. Legend is the first. The third, Champion,…