With us today is author Skye Malone. She was kind enough to answer a few questions for me and share an excerpt from her new YA Paranormal Romance, Awaken, which released yesterday and is currently on sale for 99 cents. And guess what’s in it?? kickass MERMAIDS!! (Scroll to the bottom to read the excerpt!) 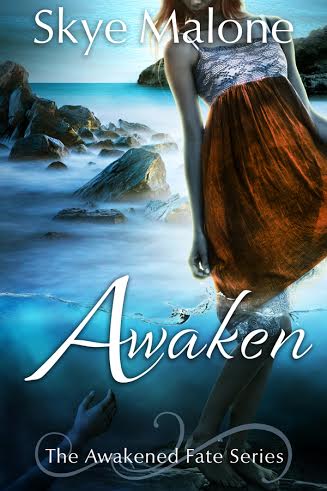 Running away from home was never Chloe Kowalski’s plan. Neither was ending up the target of killers, or having her body change in unusual ways. She only wanted a vacation, someplace far from her crazy parents and their irrational fear of water. She only wanted to do something normal for once, and maybe get to know her best friend’s hot stepbrother a bit better at the same time.

But the first day she goes out on the ocean, strange things start to happen. Dangerous things that should be impossible. Things to which ‘normal’ doesn’t even begin to apply.

Now madmen are hunting her. A mysterious guy with glowing blue eyes is following her. And her best friend’s stepbrother seems to be hiding secrets all his own.

It was supposed to be a vacation. It’s turning out to be a whole lot more.

Give us an insight into Chloe. What makes her so special?

I like to think that Chloe is special for a number of reasons. She’s the type of person who thinks she’s ordinary, but who is stronger than she knows and more capable of dealing with the challenges that confront her than she realizes. She’s survived parents who are – shall we say – less than loving or supportive, and she’s created stability in her life despite this.

In other ways, Chloe is special because she is a girl with a complicated identity, and there’s much more to her than meets the eye – not that she knows this when the story begins!

What was the inspiration behind Awaken?

Awaken was actually an experiment. I’d finished The Children and the Blood trilogy, published one of them, and I was looking for what to write next. I decided to try a paranormal romance. The first idea that popped into my head was ‘Well, how about a book about a mermaid? I like mermaids. This could be fun’.

Things went nuts from there. In no time flat, I had this bundle of crazy ideas, all jumbled and disassociated or loosely strung together with notes. Pretty soon, I realized that this wasn’t just one book, it was two… and then three… and then more. I’ve always enjoyed stories with strong characters who exist on the outside of ‘normal’ society, so that got involved fairly quickly. I love complicated villains, so that had to come into it eventually as well. My mermaids turned relatively badass, because goodness knows I love action and adventure, and madmen showed up in not too long as well. And thus, Awaken – and the Awakened Fate series – was born.

Tell us some more about yourself and your background.

I’m an Illinois native who wants to travel the world, and I’m a fan of anything that brings magic into the everyday. I’ve got an English Literature degree, and I think books are one of the best decorations a room can have. As a writer, I started off in fantasy and I don’t think that will ever change. I can’t seem to get very far in thinking about a story before something supernatural or superpowered muscles its way into the plot!

Why do you write?

When I was a kid, I didn’t know what I wanted to do when I grew up. I simply couldn’t find anything that interested me. Then, one day, my teacher gave us a creative writing assignment – the first I’d ever had. My mind flooded with ideas. I felt like someone had handed me exactly what I’d been looking for, even though I’d never realized I’d been searching. That was when I knew this was what I wanted to do with my life.

It hasn’t changed since. I can’t imagine not writing.

Do you ever get writer’s block?

Sometimes. I have a tendency to be a perfectionist, and this can result in being way too hard on myself and my work. I’ll think that something in a plot must be a certain way, because that’s how I’d envisioned it, when in actuality, the story is telling me that it needs to change. Or, conversely, I’ll feel convinced that something is wrong with the story when in reality, it’s totally fine. To get out of those blocks, I’ve found that I either have to step back and listen to what the story is telling me (usually the characters know much better what needs to happen than even I do), or realize that my feelings are probably rooted in something besides the story itself (fear of criticism, etc). Either way, the only path through the block is working and not giving up on the story overall.

How do you think you’ve evolved creatively?

I think that every new book I’ve written has proven something to me. After many short stories, my first ‘official’ novel was proof that I could finish something of significant length (this one hasn’t been published, by the way, and won’t without some substantial rework). My next few were proof I could write series. Things have gone on from there. I’m learning with every book – how to do this faster, how to have more faith in myself. I also try to stretch myself somehow with every story, and I think that has helped me grow as a writer overall.

What book/s are you reading at present?

Oh, man, I have so many books that I want to read on my Kindle that it’s crazy! At the moment, I’m trying to set aside time to read Jim Butcher’s Fool Moon and Helen Boswell’s Mythology: The Wicked. I just finished Helen Boswell’s first book, Mythology, as well as JC Lillis’ How to Repair a Mechanical Heart and We Won’t Feel a Thing. They were all fun reads, and well-worth picking up.

What advice would you give to your younger self?

I think I would tell myself this:

Swear. Write the sex scene. Write the violent action scene. Do anything – do everything – you want with this passion of yours, because in a hundred years, who’s going to care? Who’s going to praise the fact that you stayed quiet, that you didn’t rock the boat, that your writing didn’t ruffle some feathers? No one. But inside all those silly risks – which aren’t really much of risks at all – there’s potential to be a great writer. There’s potential to make a difference with the fruits of your work – to feed the hungry or build a school. Those things are always going to be more important than the chance that somebody might be offended by what you write.

Thanks for joining us, Skye. I really love your last advice there. And here’s the excerpt from her new book:

“You ever been to the ocean before?” Noah asked after a moment.

I shook my head. “I always wanted to see it, though.”

A heartbeat passed as he watched the water. “You could’ve come with Baylie to visit us sooner.”

I glanced at him. He didn’t look at me. “It’s complicated.”

Silence returned. I swallowed, still feeling awkward. It was just the two of us for as far as I could see in either direction, and from the way he was sitting there, he seemed like one of the stones, comfortable with the idea of remaining silently by the seashore for eternity.

Quieter, Baylie had said. I didn’t have much to go on for how he’d been before, but now… he was certainly that.

I looked down to my legs, absently noting the drying salt from the water glistening faintly on my skin. I probably should just go back up to the house. I wanted to stay, to get as close to the deep water as I dared, but with him here…

“Even if,” he acknowledged the words with a shrug, “it’s complicated.”

He smiled and returned his attention to the water. “I always wondered what it would be like, growing up somewhere else. Somewhere away from the ocean. It’s just such a…”

“Force,” I filled in when he trailed off.

He looked back. “Yeah,” he replied, as though pleasantly surprised.

I could feel heat spreading like wildfire up my neck and I turned my face away, hoping the shadows hid the blush.

“And I can’t imagine what that’d be like,” he finished. “Not having it nearby.”

I hesitated. I didn’t know what to tell him. I’d always wanted to come here, and now that I was sitting only a few yards from the water…

It was like a sound you’d heard all your life, but so faintly you’d never noticed it. And now, being so close to the source, almost immersed in the amazing, overwhelming source, you suddenly realized what you’d been hearing.

And what you’d been missing.

“Not as nice as this,” I whispered.

He looked over at me. I could feel the blush coming back.

My mind tossed up a few shining memories of my parents. They’d thrown away every picture of the ocean that I drew in school. They’d ripped pages from books that mentioned the sea. They’d punished me for asking them to paint my room blue.

“No,” I answered, certainty hardening my voice more than I intended.

“I mean, I’m pretty sure some people don’t,” I amended, trying not to grimace and hoping he wouldn’t ask for more.

He turned to me, and my throat choked from the way his green eyes searched my face. “But you do.”

His brow furrowed and he looked away.

He shook his head. “Nothing.” 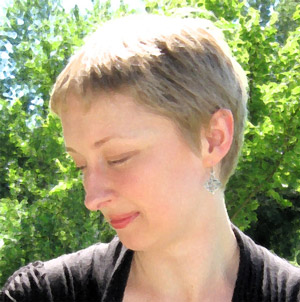 Skye Malone is a fantasy and paranormal romance author, which means she spends most of her time not-quite-convinced that the things she imagines couldn’t actually exist.

Born and raised in central Illinois, she hopes someday to travel the world — though in the meantime she’ll take any story that whisks her off to a place where the fantastic lives inside the everyday. She loves strong and passionate characters, complex villains, and satisfying endings that stay with you long after the book is closed. An inveterate writer, she can’t go a day without getting her hands on a keyboard, and can usually be found typing away while she listens to all the adventures unfolding in her head.

Bok Blitz: Such a Secret Place by Cortney Pearson

We moved into our first house over the weekend! Whoo hoo! I'm convinced I'll never…

Blog Tour and GIVEAWAY: An Absence of Light by Meradeth Houston @MeradethHouston

An Absence of Light is a YA Sci-fi/Horror novel that was recently released. You can…