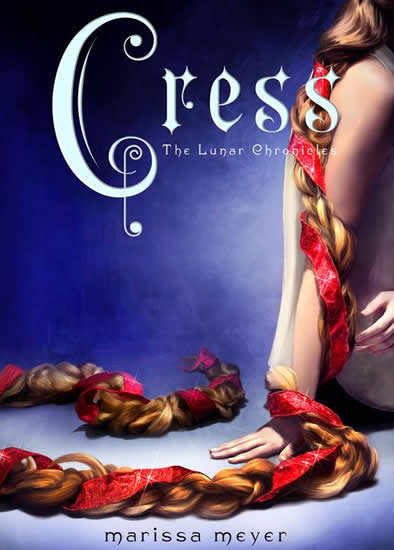 Meet Cress: petite, blonde, a Lunar shell, skilled hacker, and hopeless dreamer. If she sounds a little like Rapunzel from Tangled, you’re not too far off. But before you discount Cress for being too much like Tangled’s Rapunzel, know that she’s utterly adorable and uses her imagination as a survival tool and motivator. What else would she rely on during those seven years of solitude?

So when Cinder and company finally contacts Cress and agrees to rescue her in exchange for dirt on Levana, who comes to rescue her but her long-time fangirl obsession Thorne? *squeal!*

Enter Thuruamatge Sybil. She discovers Cress’ traitorous plans, sets a trap for the mechanic, and the rescue goes south: Wolf is shot, Scarlett is kidnapped and in her place is left Jacin, Sybil’s guard. Meanwhile, Cress and Thorne tumble through Earth’s atmosphere on the crashing sateilite, landing in North Africa.

Handsome Thorne losses his _____ (psht. And you thought I was going to spoil it.) And they still need to cross the Sahara if they have a hope of surviving. Cress’ disillusionment wrestles with the first threads of real romance, even as some of Thorne’s true colors come to light. Thorne looks like he may be softening to the damsel in distress. Until Cress also is kidnapped.

Cinder also flees to North Africa, where her only hope of saving Wolf lies. She meets up with Dr. Erland and together with Jacin, they plot a way to stop Kai’s wedding. Can they pull off such a daring plan?

Plot twists, laugh-out-loud humor, and torture that’ll make you grimace lace this book together. Characters continue to develop, flipping from Cinder’s to Cress’ to Kai’s to Scarlett’s POV (though we’re mostly in Cress’).

We discover the depth of Wolf’s feelings for Scarlett, what Kai thinks about the wedding (and his beloved fiancée), Iko’s new bod. We also take our first trip to Luna and receive our first glimpse of mysterious Princess Winter (and the first peek of her precious romance. I think it’ll outshine them all).

The only problem now is waiting until Winter releases …

Book Review: Under the Never Sky by Veronica Rossi

Under the Never Sky is the first in a trilogy. Check out the second, Through…