The 5th Wave is the first in a NYT bestselling YA sci-fi trilogy. You can pre-order the second, The Infinite Sea. I’m giving away a copy of The 5th Wave on Wednesday–so stay tuned! 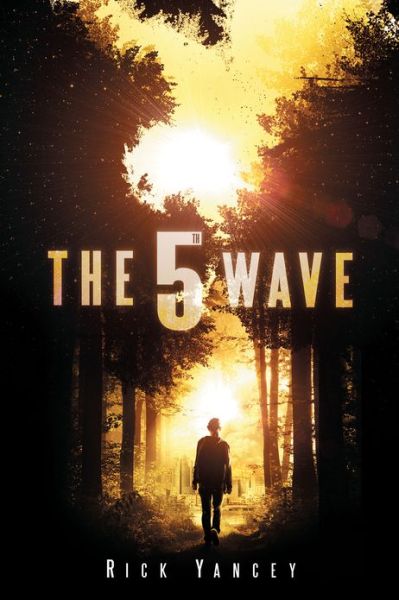 Now, it’s the dawn of the 5th wave, and on a lonely stretch of highway, Cassie runs from Them. The beings who only look human, who roam the countryside killing anyone they see. Who have scattered Earth’s last survivors. To stay alone is to stay alive, Cassie believes, until she meets Evan Walker. Beguiling and mysterious, Evan Walker may be Cassie’s only hope for rescuing her brother—or even saving herself. But Cassie must choose: between trust and despair, between defiance and surrender, between life and death. To give up or to get up.

Confession: I totally thought this book was about zombies until I actually began reading it. I was shocked to find this book isn’t about a zombie apocalypse at all.

And let me tell you, your Hedwig-inspired love of owls will be thoroughly obliterated.

I appreciated the new spin on aliens. If other life existed, would they really just land in a spaceship and march onto our planet? The 5th Wave questions that assumption in a fresh way. There is a decent info-dump near the beginning, though I really didn’t mind because I wanted to know what happened since the 1st wave.

The 5th Wave is told from several different perspectives: mainly Cassie, Zombie (a nickname), even her little brother Sam. While I appreciated how the book sectioned off each POV, I still had trouble differentiating whose head I was in. Eventually, because of each character’s plot line, I could keep up.

Cassie is a strong character—she has to be to have survived for so long. She’s a typical teenage girl who still remembers her old life, including her old crush, with fondness. She loves her family and will do anything for them, even risking a suicide mission once her little brother, Sam, is taken away to a base camp.

If life takes a zombie turn, I want her on my team.

Cassie runs into Evan Walker, a young man with a passion for cleanliness, killer aim, and a dark secret. Although his perfect cuticles are admirable, I wasn’t his biggest fan. His immediate attachment to Cassie made me scream: STALKER. While Cassie did have insta-love tendencies that made me want to punch her, she still recognized the danger in trusting a stranger. I only think she should’ve had more of a wariness toward him. And then run.

Meanwhile, captured Sam is geared for battle with others, including Zombie. Injected with a tracker, they begin training to kill the aliens. But Zombie sniffs something foul and discovers more about the 5th wave than he ever wanted to know.

A few reviewers say putting a gun in a child’s hands as young as Sam is unbelievable. I disagree. Using child soldiers is a very real problem in today’s world, this only redirects our attention to it.

You might like this book if you enjoy survivalist stories like The Hunger Games, Ender’s Game, even the show Revolution. If you don’t like multiple POVs, aliens, or anything that sniffs of insta-love, then this book probably isn’t for you.

Don’t forget to come back Wednesday for the giveaway!

Prodigy, is the second in the Legend trilogy. Legend is the first. The third, Champion,…