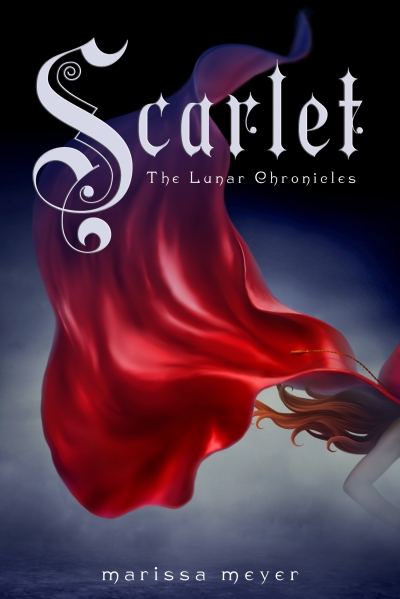 Don’t worry if you can’t remember everything from Cinder. Scarlet doesn’t begin with an info dump, but weaves in nuggets of information in strategic places so you can dive into the story without falling behind.

The plot begins with Scarlet, a feisty redhead determined to figure out what happened to her MIA grandmother.

One blogger sums up Scarlet’s character nicely: “Cinder is like her fairy tale counterpart—intrinsically good and perpetually misunderstood and victimized…But Scarlet demands to be noticed—her personality jumps off the page.”

Scarlet reminds me of Captian Mal Reynolds. She carries a gun, isn’t afraid of danger, and will never ever leave behind those she calls family.

Wolf and Scarlet team up in a tumultuous relationship—complete with high sexual tension—to rescue her grandmother. At one point Scarlet reflects with surprise how long she had Wolf have known each other. One day.

Because of how much they go through, I was also surprised to find how little time had passed. I generally dislike insta-love. However, their relationship did not feel as shallow as other insta-love connections.

I picture Wolf to be Wolverine-ish, with a dark quiet mystique. Minus the claws.

Meanwhile, Cinder wrestles with her newfound royalty and the Lunar gift, which turns out to be very difficult to control. When is it ok to manipulate people? For the greater good? Or to save her life? Or not at all, because it separates her from Queen Levana?

We are also introduced to the Captain—er, cadet—Thorne, who provides comic relief along with a beloved past character. Their one-liners will make you grin.

I loved the spin on Red Riding Hood and how it fits together with Cinder’s tale to build upon the Lunar world. I can’t wait to see how Cress will build upon the world and advance the story.

You might not like this book if you prefer men with more than a “I need to protect you” drive or hate figure out the plot twist beforehand (As with Cinder, I think this is due to familiarity with the Red Riding Hood fairy tale). But if you are a fan of Once Upon a Time and enjoy seeing creative fairy tale twists, then this book (and the entire Lunar series!) is for you.