Shades of Earth is the last in Beth Revis’ NYT bestselling trilogy. Read my review of the first, Across the Universe, and the second, A Million Suns. 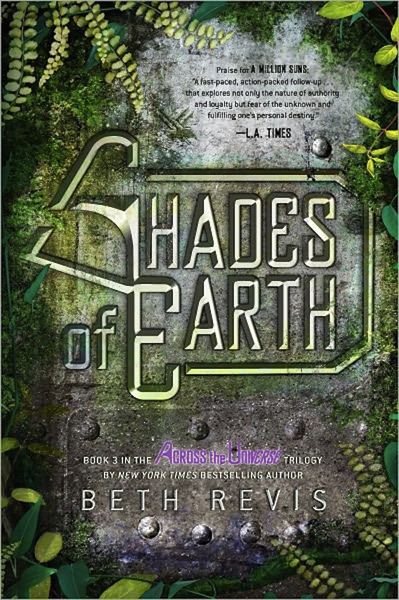 Amy and Elder have finally left the oppressive walls of the spaceship Godspeed behind. They’re ready to start life afresh–to build a home–on Centauri-Earth, the planet that Amy has traveled 25 trillion miles across the universe to experience.

But this new Earth isn’t the paradise Amy had been hoping for. There are giant pterodactyl-like birds, purple flowers with mind-numbing toxins, and mysterious, unexplained ruins that hold more secrets than their stone walls first let on. The biggest secret of all? Godspeed’s former passengers aren’t alone on this planet. And if they’re going to stay, they’ll have to fight.

Amy and Elder must race to discover who–or what–else is out there if they are to have any hope of saving their struggling colony and building a future together. They will have to look inward to the very core of what makes them human on this, their most harrowing journey yet. Because if the colony collapses? Then everything they have sacrificed–friends, family, life on Earth–will have been for nothing.

Confession: I read the entire 400 pages in one sitting, despite sending myself into a 3-day raging migraine. I know, I know. Dumb. I heard the lecture from my husband. But I needed to know what happened. Read it and you’ll understand.

Amy and Elder have landed—er, crashed—on Centauri-Earth. Besides the dangers mentioned above, Amy’s reunion with her parents isn’t what she imagined, and her parents may be the biggest danger of all. Which only makes the parent-child relationship ripe for conflict and story.

Guess what’s baaaaaaaack? Elder thought he escaped Phydus, but the drug has only followed him to the new planet and is now showing up in unexpected places. Now ethics come into play. When is it okay to solve a problem with medicine, a banished one at that? And leadership power struggles–Elder may be in charge of Godspeed, but they aren’t on the ship anymore.

Besides the gripping plot, I drooled over the artistry of the writing. When Amy and Elder finally have sex, it’s beautiful. You can’t help but cheer for them since you’ve been holding your breath for the past two books.

Most important, I have never seen such creative use of white space (where there is no writing on the page). The way Revis uses it to depict Amy’s emotions is very effective and powerful. You may point out Revis had been writing in this style throughout the entire series. Well, I listened to the first two via audiobook. So I was struck with the artistry of the white space when I read this one in paperback.

And how she uses white space and chapter numbers near the end of the book . . .

Let’s just say you could buy Shades of Earth because of the white space alone. I will.

Want a visual while you read? Explore Godspeed here.
Check out Revis’ website here.
Become a fan on Facebook here.
Follow Revis on Twitter here. (Her tweets are full of personality. So you should.)