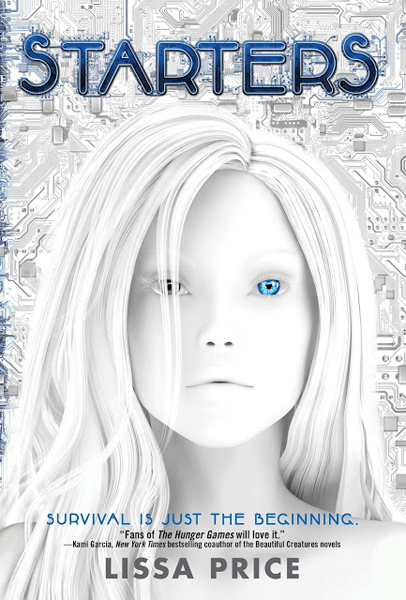 I wasn’t sure what to expect when I picked up Starters, but I was really pleased with the result. I loved how Price wasn’t afraid to get her hands dirty with tackling the topic of eternal youth. I saw this book more as a social commentary than anything else. We strive to be young with our facial crèmes and Botox and diets and surgeries—Starters merely puts into story an extreme example.

Price did an excellent job of making the Enders (the elderly) creepy. We can feel Callie’s hate for them and their jealousy of the younger generation. The chasm between the old and the young stretches for miles, which is similar to our culture today.

I tore through the book in an afternoon.  That being said, there are a couple unanswered world-building questions, but I’m not too worried about them because I think they’ll be explored more in Enders. Though, I wish I could’ve understood a little better why Callie didn’t immediately return to Prime Destinations once she realized her chip malfunctioned instead of waiting until she heard her renter’s voice in her head.

In terms of relationships, I really enjoyed Callie’s relationship with her renter, Helena. For there to be any sort of bond at all is unusual and I liked seeing the development of this friendship.

Yes, there is a love triangle. However, it’s not as obnoxious as some YA triangles can be. You still have the solid guy friend Michael and the hot new Blake. But a new revelation/plot twist near the end of the book shakes what you think you know about her relationships.

I’ve read several negative reviews about Starters, despite its several awards, but I do think it deserves its spot on the NYT and international bestseller list. It raises questions about our own culture we need to examine. I’m already excited and looking forward to Enders.

You’d really like this book if you’re looking for YA that leans more sci-fi than dystopian, if you devour page turners, or if you like social commentary in your novels. If you like every plot hole filled before you’re willing to read or are really tired of reading of viruses (though the spores are not a virus) or anything virus-like rampaging the country, then you might want to steer clear.

One Wish Away releases next Monday from Bloomsbury Spark! And you can celebrate by entering…