A Million Suns is the second in a trilogy. Check out my review of the first, Across the Universe, and be sure to read the third, Shades of Earth. 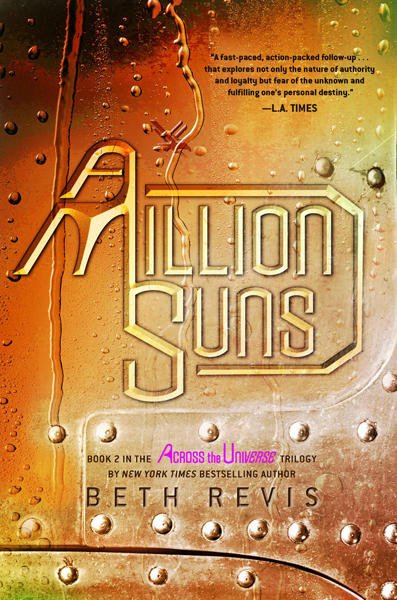 It’s been three months since Amy was unplugged. The life she always knew is over. Everywhere she looks, she sees the walls of the spaceship Godspeed.

But there may be hope: Elder has assumed leadership of the ship. He’s finally free to act on his vision—no more Phydus, no more lies.

But when Elder learns shocking news about the ship, he and Amy race to discover the truth behind life on Godspeed. They must work together to unlock a mystery that was set in motion hundreds of years earlier. Their success—or failure—will determine the fate of the 2,298 passengers aboard Godspeed. But with each step, the journey becomes more perilous, the ship more chaotic, and the love between them more impossible to fight.

I love what Maggie Boyd wrote in her review of A Million Suns. “Growing pains can be a horrible thing, especially when those growing pains are experienced by hundreds of people.” Couldn’t have said it better myself. I hate politics, but I have never been so enraptured by the running of a government than when receiving a behind the scenes tour with Elder. Running a spaceship is hard, especially when riots are breaking out, people are being murdered, and the citizens seem to listen more to an instigator than the guy in charge. I couldn’t put the book down. I didn’t know politics could be so exciting.

Meanwhile, Amy has discovered a series of clues Orion left for her in a giant scavenger hunt. One clue even sends Elder outside the ship into space. Flashback to Harvey, anyone? She and Elder discover Godspeed has even more secrets to unlock, and the truth is much much worse than they thought.

Characters continue to develop in this second book. Amy wrestles with the after effects from her attempted rape, which added credibility of the event. Although she still yearns for her parents, she begins to adjust more to the ship, even realizing she needs to look out for her own safety. To me, this was a mark of maturity.

Elder seems more confident, despite his reserves about leading. He seems to have aged about ten years or more during the scope of the book. Orion, too, even though he’s out of commission, seems to grow through the clues Amy finds. Maybe he’s not the villain we thought he was . . .

Overall, I thought A Millions Suns was as solid as Across the Universe and didn’t seem to suffer from “middle book syndrome.” I’m thrilled to begin the third in this trilogy.

Bok Blitz: Such a Secret Place by Cortney Pearson

We moved into our first house over the weekend! Whoo hoo! I'm convinced I'll never…