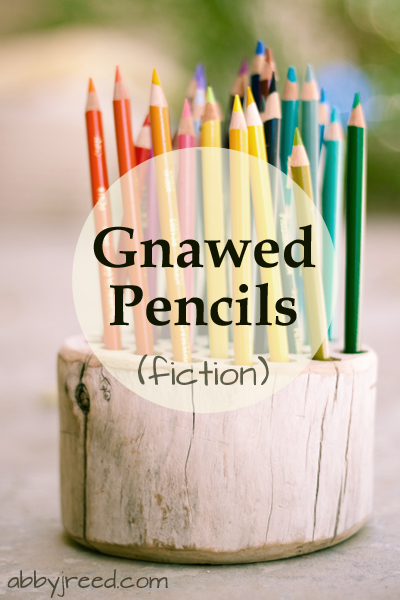 I arrived at the classroom early Monday to find him waiting by the door. “Are you the returning student?” I hipped the stack of books and papers and unlocked the door.

He didn’t look up from the ground. “Yes, Ma’am.” His pants were ragged, average-brown hair a little longer than approved dress code length.

I walked to my desk to put down my stack. “I expect you to come to class prepared each day, same as the others. Since you’re coming in a little late into the semester I can give you some extra tutoring to help you along. I don’t have that plaque on my wall for letting students fall behind. Though since it’s only English you’re taking, you shouldn’t have trouble keeping up.”

He shuffled a foot and made brief eye contact.

My chest tightened, as though my Grapes of Wrath flew from my stack and walloped me. “Robert? Robert Maples? Is that you?”

He nodded and repositioned his backpack, eyes back on the ground. “Yes, Ma’am.”

“Wow. I barely recognized you.” I shook my head and shoulders, trying to loosen the tightness in my chest. “You look, well, different.”

Awful. I wanted to say awful. He looked beat up and haggard, like one of those red chew toys the dogs gnawed on and spit out when they’re sick of the taste.

The snap of life was gone; his vibrant spirit beaten out long ago. Any enthusiasm he carried onto the battlefield was shot away and left in the Vietnamese mud. Painful watching him examine his old classroom, but then it grew unbearable—he acted old, as though the young part of him died overseas. If it weren’t for the three freckles above his brow bone he’d be unrecognizable.

I hesitated for a moment—I didn’t want to make him uncomfortable. ”You can sit there, if you’d like.” I gestured to a couple chairs near the window. “These seats are empty, but there’s one up front, too.”

He made his way to the front desk, as if all his bones consolidated together and agreed to work before every movement.

“What made you come back?” I said.

“Less silence, Ma’am.” Only when I stopped rearranging my desk did he add, “Silence is noisy and crowded.”

During my free second period I stomped into the principal’s office. Empty. I marched into the teacher’s lounge.

“Where’s Jackson? I need to talk to Jackson.” I grabbed one of the powdered jelly doughnuts the office aid brought in earlier. The rest of the teachers gathered around me like a flock of gnats along a river stream. I pushed through them.

“How many people do you think he killed?” somebody said.

“Twenty—no, no, fifty at least,” the math teacher said.

Principal Jackson leaned against the door frame. He was a thin, sharp man with a liking for heavy sweaters despite the heat. Today he wore rubber-duck yellow.

“What do you think of him, Vicky?” His smile held more curiosity than cruelty.

“You could’ve left me a note in my mailbox or scribbled his name somewhere so I wouldn’t have been caught off guard. I expected a 19 year old, not some 28 year old ‘Nam vet drop out.”

“I thought it best. Besides you used to like him. Raved about him all the time, if I remember right. Wasn’t he the guy who wrote a novella for your Scarlet Letter assignment?”

“Do you keep that close of tabs on every student?”

“Just the interesting ones.”

“What makes you think I don’t like him now?”

Jackson arched his eyebrow. “The school board says he got discharged.”

The principal shrugged. “I wouldn’t ask him about it. He’s not missing a leg or an arm, is he? So it’s probably something mental. He’s been living at home for the past eight years. But here’s the real news. He was part of the My Lai massacre.”

I sucked in a breath. Christ. My Lai? And they let him wander around these halls without supervision? Getting a surprise ‘Nam vet was one thing. A My Lai participator was another. Hopefully, none of the students knew.

I’d move him to the back table. He was probably mulling over when he’d get his hands on some of those senior girls.

“No choice. The board threatened with my job. And trust me, I threw a fight.”

“Is this even legal?” Of course, only one guy was actually convicted. But you never knew what’s true and what’s not—more likely the entire company raped the women and then sliced them to pieces.

Jackson held up his hands in a plea. “You don’t have to tell me. But they adopted him as their community project. Self-righteous asses. Just help him pass the class, and then we can get rid of him.”

Robert stopped turning in his homework around the same time. I marked a string of fat red zeros next to his name in the grading book. They looked like open mouths, wide bloody mouths screaming in agony.

I paced the classroom when the students analyzed another Shakespeare sonnet. While the others chatted about symbolism, scratching notes for presentations later, Robert gazed at his handouts. He made no move either to read the text or to jot notes.

“Robert, where are your pencils?”

He looked like the sophomores I caught cheating on their exams. “They broke, Ma’am.” He curled his arms around his table, protecting his blank handouts like a starved dog.

What was he doing here? He helped slaughter 300 civilians. Sure, they were Congs, but we’re talking children. And that monster sat in the same room as our children.

“We can get you some new ones.” I grabbed him another box from the supply room and continued my prowling.

He opened the box and slid them into his hand, creating tiny bulleted pinpricks in his palm.

Three days later, on Thursday, the snapped pencil halves appeared strewn along the parking lot sidewalk. I picked one up. It was gnawed halfway to the lead, teeth marks piercing the eraser. Really. Such a waste of school materials. If only the board decided to tackle another community project.

But that plaque on my wall said I hadn’t given up on a student in twenty years. I couldn’t start now, monster or not.

On Friday, Robert didn’t have his pencils or homework. This time I put two whole packets of pencils in a can and left it on his table. As he was packing up for the day, I slid past and took the can, storing it within his view in the back cabinets. I developed a habit of pulling it out and placing it on his table, taking it away at the end of the day. Protect the pencils; protect the students.

His backpack disappeared shortly afterwards. I found that in the dumpster when I took out the trash, torn straight down the middle with the sides hacked into jagged pieces.

Did he slice the bodies in My Lai the same way? I didn’t want to think about it. Lord. How hard did he beg the school board to let him back in? He probably bribed them. Last thing anybody wanted were the Viet Nam vets trickling back into our world.

I bought him a new backpack. Don’t ask me why, but maybe it’s because I liked the old Robert. I wanted to give him a chance to not destroy things like he destroyed the people in My Lai.

He used the backpack for three weeks before that too was hacked into pieces and thrown into the dumpster.

His beard grew out frazzled, as though it had been yanked and taunted with a brush. The girls only left him alone when he stopped bathing altogether. Zeros lined my grade book. He’d be leaving much sooner than both Jackson and I had hoped. I couldn’t say I was unhappy about it. Just not right having him next to our students.

Finals came faster than I expected. If he didn’t pass, he couldn’t come back for the second semester. I may have slipped in more difficult short essay questions I usually reserve for my AP students.

I put the pencils on his desk and passed out the exams. Students were extra antsy today, probably because it was the end of a Friday. Robert snatched his pencil and wrote his name in a flourish, a semblance of his old enthusiasm. Perhaps he would not only pass but receive a high grade.

Then he stopped writing and stared at the exam, eyes in a dream-like glaze. After several minutes he put down the pencil, his head following.

A few of the girls dropped their exams on my desk, gave him a sympathetic look, and pranced out the door to Christmas Break. The bell rang and the rest of them scattered, singing choruses of God Rest Ye Merry Gentlemen and Jingle Bells.

Robert slumped over his table alone.

I stood over him, the long gray table extending past either side of me like clunky wings. He bowed his head, hair brushing the bridge of his nose. I picked up the edge of the test in front of him, moving it back and forth.

“You know these answers, Robert. I know you do.” He had covered this material before he left for the war. Surely, the infantry didn’t push out all literature.

“Kill them. I remember their faces, though. Every face. But I didn’t do it.”

I gripped the edge of the table. “You don’t have to tell me, Robert. I don’t want to know.”

He walked toward the door. “They were standing along the pit rim. Some of the women had blood dripping between their legs, and they were crying.”

Ice snaked over my vertebrae. “Robert, I don’t want to—“

“—I was told to shoot them, but I couldn’t do it,” he said even louder. “I still can’t do it. You know, sometimes in my mind I wonder what if I had. Then the captain jumped in and shot them, just unloaded and shot them all. They fell over like dominoes. Bang. Just like that.”

The images formed in my mind. The smell of the jungle. The lemon-metallic taste of terror. “I don’t want—“

“—I didn’t even bury the bodies. I couldn’t do it. I couldn’t even put the hacked up baby next to its mother.”

He stopped. Nodded once. “Yes, Ma’am.” His voice cold and dead. He shut the door quiet behind him.

I watched the door after he left until my eyelids grew heavy, my brain sore from pushing out the images. I didn’t care. I didn’t want to know. I didn’t want to wonder that if maybe we had swapped places I’d also be chewing writing utensils.

I snatched the can of pencils from the table on my way out. Only one was used, gnawed through. I tossed them into the trashcan and turned off the light.

Related:
Cleaning Dead Hydrangeas
How to Pay the Bills