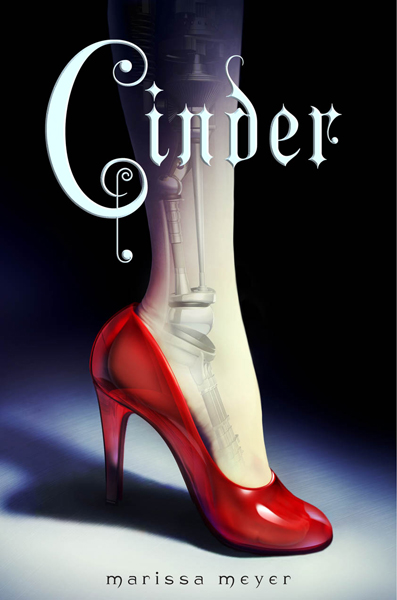 Before you groan and write it off as “another fairy tale” know the Cinderella story isn’t used as a crutch. Instead, Meyers uses it as a spring board to launch a completely different story. Only a skeleton of plot points from the tale are used, and that’s mostly in first quarter of the book.

Cinder is cyborg, a human with over 30% robotic parts. Robots are called androids, and people die faster from the plague than anything else. Cinder’s stepmother signs her over in a cyborg-draft to be part of experiments to find a cure the rampant virus.

The pumpkin is a beat-up orange car, the closet thing to a fairy godmother is a scientist, and while Cinder doesn’t lose her shoe, she does lose . . . well, you’ll see.

Some complain the ending is a predictable. I think this is mainly because we are familiar the fairy tale and know what to look for.

If you appreciate what Once Upon a Time does with fairy tales, then you’ll want to read this book. If you prefer the more tied and true version of the tale, you probably want to stick with Disney.

Talk with your teens/parents (these are taken from Meyer’s website):

Requiem is the third in a trilogy. Check out my review of the first, Delirium,…

Book Review: Under the Never Sky by Veronica Rossi

Under the Never Sky is the first in a trilogy. Check out the second, Through…