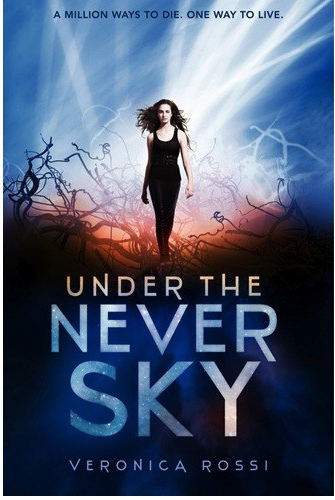 I gave Under the Never Sky a 4 on Goodreads, though I think, if it were an option, I’d give it a 3.5 instead. Rossi’s writing could have been stronger (others may disagree), but the storyline was well-conceived. Despite a pounding headache, I was compelled to finish. Maybe it was fear over the cannibals . . .

The book alternates between Perry and Aria’s point of view. Their worlds collide within the first fistful of pages, then we follow each character to their respective homes before they are brought together again. I enjoyed seeing their misconceptions play against each other.

I love what Rossi did with Aria’s home in Reverie. The people in Reverie use a Smarteye, like an eye patch, to access a virtual world. You can attend parties or concerts, make money, eat, have sex—all without any consequences. Except the virtual world is more engaging than the real, and everyone lives buried within the Smarteye.

Perry lives outside the Reverie dome. In his world, some people develop special Senses. Perry is rare. Not just because his brother is the clan ruler, but because he has two senses. He has super-sonic vision and smell.

I really appreciated Rossi’s mention of (sorry, guys) menstruating. The topic isn’t tackled much in dystopian/sci-fi. I mean, really, we don’t see Katniss Everdeen pausing for a tampon break. Every author has topics they avoid, and solving these every day problems is a lot harder than it seems.

Talk with your teens/parents:
If you could have a special Sense, which would it be? (mine would be smell or sight)
What similarities do you see between the Smarteye world and its culture and ours?

Glow is the first in a YA trilogy. The second is called Spark. The third, Flame,…