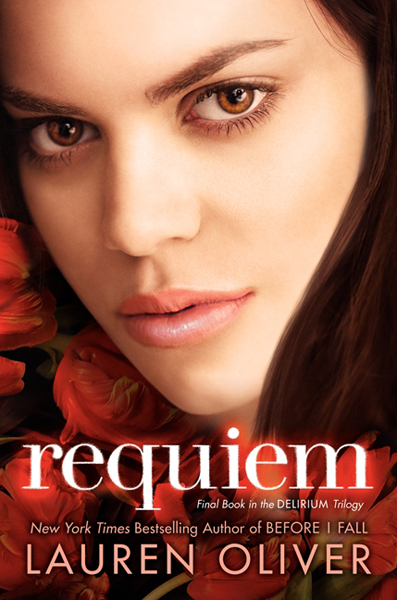 The story alternates between Lena and Hana’s point of view, the first time we are ever in the head of someone cured. We even overhear one of Hana’s prayers, who takes the well known liturgical “God forgive me, for I have sinned” and puts a cured spin on it, “Cleanse me of these passions, for the diseased will wallow in the dirt with the dogs, and only the pure will ascend into heaven.”

Reminds me a little of what someone in a cult might say.

There was much more bad language in Requiem than in the first two. And I didn’t think the writing was quite as beautiful as it was earlier, though still comendable. Maybe both are excusable due to the characters’ stress levels—you be the judge.

One of the mysteries in the trilogy is why Lena’s mother named her after Mary Magdalene from the Book of Lamentations in The Book of Shh. To her mother, not only was Lamentations a story of love, but one of sacrifice.

I thought this was fascinating because the real book of Lamentations can also be said to have sprouted from love. Most believe the book was written after the Babylonians (think present-day Iraq and Seven Wonders of the Ancient World) conquered Jerusalem and lugged the Israelites back to Babylon. The book is filled with anguish over the suffering Israelites, born out of a great love for them.

By this point you may have heard about Requiem’s ending. Oliver chose to give the trilogy a more open ending than many would have liked. Before you go crafting your own picket sign, know why I think I liked it.

It gives room for the characters to live beyond the pages. When I closed the book, for a moment I believed Lena and Alex and Julian and Hana and Raven really did exist. Their story didn’t end. I just ended my glimpse into their lives.

Talk with your teens/parents:
What is your love story?
Who do you think Lena ends up with, Julian or Alex?

"Are you my mummy?" just kidding. But the gas mask alone freaks me out enough…