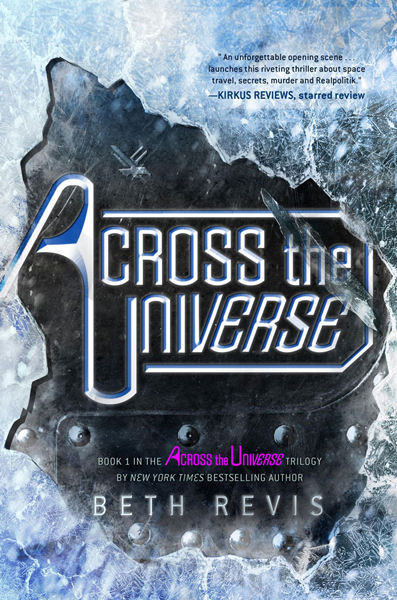 
I loved this bestseller. The chapters alternate between Amy and Elder’s perspective and are pretty short. Perfect for someone who is motivated by power-chapters. I loved the idea of cryogenically freezing people. We flash-freeze food, so why not people? The process is described in detail so we can really believe this thing is possible.

I also loved the characters. While sometimes I wanted to hit Amy in the back of the head for being stupid, I really felt her and Elder’s friendship was natural. Sometimes people need to be friends first before they can fall in love, and if Amy and Elder do in a later book, it’s because the stage is set well in this one.

This book touches on some tough topics such as genetic manipulation, cloning, suicide, and attempted rape and its psychological affects. Revis in’t afraid to wrestle with harder topics, especially ones relevant today. I applaud her for that.

My absolute favorite part was the stars. At one point a character sees the stars outside Godspeed. (Stop gritting your teeth–I didn’t ruin anything.) Seeing the real stars stuns them so much they are changed. They can never accept the light bulbs passed off as stars again.

I thought this is a beautiful depiction of truth. Once we know the truth, we are freed from the lie and are hard pressed to again accept it. “You shall know the truth and the truth will set you free.”

Besides, I drool after the heavens. I could spend hours gazing. Until my pinky toes go numb and I can feel my boogers freezing, and I hate that, so then I head inside. Stars are a prevalent theme in my own book.

You might not like this book if you want fast romance and a completely unpredictable ending. I thought the last handful of chapters could’ve been saved for the second book, but that’s just me. However, if you do appreciate believable sci-fi and love space, then this book is for you.

Talk with your teens/parents:
If you had the chance, would you choose to stay on Earth or join Godspeed as cargo? Why?
Do you think there are other life-supporting planets out there? Why or why not?

The 2018 YA Scavenger Hunt Announcement!

This year I'm participating the YA Scavenger Hunt! YAY! Trust me, these prizes are way more exciting…