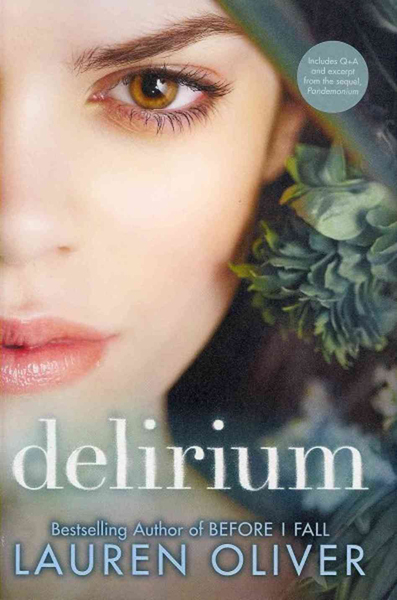 I knew I had to read Delirium after the first line. Love is a disease? Sounded like a story with amazing potential to me. Everybody can relate—we have all loved someone or something at least once in our lifetime.

Lauren Oliver has a beautiful poetic style that brings Lena’s world to life with such vividness you believe you are actually there. You really see the city and Lena’s life through her eyes. One of my favorite lines is: “Most thing, even the greatest movement on earth, have their beginnings in something small . . . And God created the whole universe from an atom no bigger than a thought.”

Since I salivate after anything related to the cosmos, I adored this line. I picture galaxies spinning and comets smashing and planets twirling—fantastic colors.

I haven’t read many dystopians that mention God. Lena breathes prayers or will utter lines like the one above now and then. I think it lends credibility to Oliver’s world since most people have some sort of faith in their life, and it points to a world whose past used this language regularly.

Oliver also included literature excerpts from Lena’s world at the beginning of each chapter. I thought this was brilliant. I would use this idea in my own book if it fit. Alackaday. *Slaps hand to forehead* It does not.

A couple excerpts were from the Psalms. Chapter 9 begins with Psalm 21:

“Lord
Keep our hearts fixed;
As you fixed the planets in their orbits
And cooled the chaos of emerging—
As the gravity of your will keeps star and star from collapsing . . .”

The real Psalm 21 starts with:

“O Lord, in Your strength the king will be glad,
And in Your salvation how greatly he will rejoice!
You have given him his heart’s desire,
And You have not withheld the request of his lips.”

The difference between the Psalms only makes Lena’s government more real. It alters things. It changes things. It lies. To see what I mean, you’ll have to read the book 🙂

Talk with your teens/parents:
What is this book saying about the power of love?
Where have you seen the strength of this power in your life?

None of these links are affiliate links. Translated into normal-people speak: if you click-through and buy, you’re not helping me purchase the tattoo I want to get my hubby for his bday.